LAUREN AUGUSTYN, BISHOP FEEHAN
Augustyn bolted to victory at the Catholic Central League championships as well as the freshman/sophomore title. She was the top freshman at the Frank Kelley Invitational. Augustyn was undefeated in CCL dual meets and was named a league all-star. An honor roll student, she plans to run indoor track.

ELLA BATES, WEYMOUTH
Only an eighth-grader, Bates ran like a veteran by going undefeated in dual meet action. She broke the Wompatuck Park course record and was the Herget Division MVP in the Bay State Conference. She competes in the Bay State Games and AAU meets in the summer.

SUMMER BEJARANO, SILVER LAKE
This junior was a consistent harrier through the fall with an undefeated sheet in Patriot League dual meets. Bejarano was a league all-star and MVP and was eighth at the Frank Mooney Invitational. She has a 5:11 mile to her credit and an 11:12 2-mile and was third at the Tommy Cochary Falmouth High Mile in 2019. A high honors student, she has a 4.8 GPA.

AVA BULLOCK, BARNSTABLE
Another eighth-grader, Bullock had a personal best of 18:49 over 5K. She finished as co-MVP of the Capes & Islands League and broke her home course record. A league all-star, Bullock also competes in triathlons. She was selected for the Advanced Studies Leadership Program (ASLP).

MIANA CARABALLO, METHUEN
A junior, Caraballo put up consistent times during the season, including a 19:57.7 5K in a meet at Chelmsford. Her best time on her home 2.8-mile course was 17:58.5 and she has clocked 5:31 in the mile. She enjoys baking and spending time with her family. Caraballo wants to become a pediatrician and attend Boston University.

KATE CONNOLLY, NATICK
The most decorated runner on this fall’s team, Connolly dominated the Bay State Conference by going undefeated and earning the conference MV for the second time. This Boston College-bound harrier was third in the Div. 1 All-State race as a sophomore and helped pace Natick to the team title. Second at the MSTCA Cup, Connolly is also a member of the National Honor Society.

MIA COSTA, WALPOLE
This senior brought her 2:58.12 1,000 speed outdoors this fall and finished a strong eighth in the Div. 1 race at the MSTCA Cup in 19:30.10. Costa ran away from the field to capture a big dual-meet victory against Milton and sprinted to a 12th-place showing at the Frank Mooney Invitational.

AVA COTE, HAMILTON-WENHAM
The junior bounced back with a vengeance after an injury. Cote was named MVP in the Baker Division of the Cape Ann League after pacing the Generals to the league title. Cote dominated league competition by surging to victory in every race. A high honors student, Cote wants to to major in biology and study pre-med, while competing in college.

NICOLE DUNBURY, BROCKTON
This senior came up big in the state-level races with a third-place finish at the MSTCA Cup and sixth at the Frank Mooney Invitational. Dunbury also finished eighth at the Frank Kelley Invite. Her 18:32 for 5K was among the fastest in the state this fall and she also has run 5:08 in the mile. Dunbury is a member of both the National Honor Society and Foreign Language Honor Society.

SHAELYN GALLAGHER, MIDDLEBORO
The Sachems’ captain, Gallagher broke Middleboro”s course record on the way to an undefeated dual-meet season. A league all-star and MVP, this senior had a streak of 16 consecutive dual-meet showings. Gallagher compete in both indoor and outdoor track, and is an honor roll student.

LEESIL GILBERT, COHASSET
A junior, Gilbert had a stellar fall by picking up all-star and MVP honors in the South Shore League. She runs indoor and outdoor track and enjoys cooking and hanging out with friends. Gilbert hopes to attend a four-year college.

SARAH HARRINGTON, TRITON
The senior was Triton’s MVP, and the Cape Ann League’s Runner of the Year. Harrington has been a multiple league all-star all three seasons and enjoys playing the piano and skiing. Ranked in the top 5 percent of her class, she has a 4.69 GPA and wants to study mechanical or biomedical engineering in college.

MICHAELA HAFFORD, MILLIS
Hafford went unbeaten in the Tri-Valley League this fall and was awarded a league MVP. The senior team captain picked up her second league all-star selection. Academically, she earned Society of Women Engineers/Boston Highest Honors and the University of Rochester Xerox Award for Innovation and Ideas.

OLIVIA JONES, HOPKINTON
Hopkinton’s senior captain captured a pair of dual meet wins and was 10th in the MSTCA Cup. A two-time Div. 3 EMass champion, Jones owns a swift mile personal best of 5:07 and 10:57 in the 2-mile. She was a National Merit Semifinalist and member of the National Honor Society. Jones plans to run cross country and track at the University of Florida.

GILLIAN KENNEY, HANOVER
A soccer transplant, Kenney had a big campaign this fall by capturing the Patriot League MVP award. A league all-star, she clocked a 20:09 best over 5K and was undefeated on the way to capturing the league title. Kenney is a member of the student council and the National Honor Society with a 4.0 GPA. She will be playing soccer at Providence College.

EMMA KERIMO, CONCORD-CARLISLE
The senior captured second in the Dual County League Championships and was a DCL All-Star. Kerimo was second at All-States in 2019 and has a quick personal best time of 17:58.21 for 5K. A stellar miler with a 5:00.8 best, Kerimo is a member of the National Honor Society and has verbally committed to run cross country and track at Dartmouth College.

EMMA LAWRENCE, MILFORD
This senior finished second in the Hockomock League championships and was an all-star and MVP of the Kelley Rex Division. Lawrence was undefeated in dual-meet competition and clocked a personal best of 18:48 over 5K. She also plays basketball and runs spring track. Lawrence has competed in the Bay State Games and plans to continue running in college.

CARMEN LUISI, HOLLISTON
This freshman was the big story of the fall as she raced to victory at the MSTCA Cup and went undefeated in Tri-Valley League dual meets. The TVL MVP, Luisi surged across the finish like to take the gold medal at the Frank Mooney Invitational. She enjoys cooking and following environmental issues. An honor roll student, Luisi plans to run both indoor and outdoor track.

CAMRYN MENNINGER, WINCHESTER
Menninger paced Winchester to the Liberty League title and was undefeated in dual meets and took fourth at the MSTCA Cup in the Div. 1 race. The talented senior clocked 18:47 for 5K and earned her second consecutive Middlesex All-Star honor. Menninger is a member of the National Honor Society and National Italian Honor Society. She enjoys traveling and surfing and will run indoor and outdoor track.

SONJA NAGLE, BROOKLINE
A superb middle-distance track runner, Nagle brought her speed to the trails this fall with a big dual-meet win over Wellesley. Nagle was a Bay State Conference All-Star and took sixth at the Frank Kelley Invitational in 19:43.10 and placed second to Natick’s Kate Connolly in a BSC dual meet. She has clocked a scintillating 2:55.71 in the 1,000 and has a 5:09.09 mile under her belt.

ISABELLE NOBILI, NAUSET
One of the best runners on the Cape, Nobili was fourth at the Frank Kelley Invitational and second in the Div. 2 race at the MSTCA Cup. The senior has run 18:18 over the 5K distance and clocked a 17:25 on Falmouth’s 2.9-mile course. Nauset’s team captain and MVP, Nobili was also the MVP of the Cape & Islands League and the individual champion. Ranked first in her class, she is the secretary of the National Honor Society and an AP Scholar with Distinction. She will run indoor and outdoor track.

One of the most decorated middle-distance runners in state history, Paige was also dominant in cross country with five wins. The New England record-holder in the 600, she copped a bronze medal in the 800 at the New Balance Nationals. Paige will attend the University of North Carolina where she will run all three seasons.

Another great Norton talent, this senior broke the Lancers’ 5K course record with a fiery 18:14. Pietrasiewicz was the Div. 4 EMass champion in 2019 and took fourth in the Div. 2 All-State race. A high honors student, she is in the National, English, Math, Science and History Honor Societies. She also plays club softball for the Rox Softball organization and has won several state and regional tournaments.

Price had a great fall campaign with a seventh-place time in the MSTCA Cup Div. 1 race and an undefeated dual-meet season. Cambridge’s captain, this senior was second at the Brown Invitational in 2019 and seventh in the Div. 1 EMass race. Price enjoys tennis and swimming in her free time and will run cross country and track at Amherst College.

Just a freshman, Saunders had a big rookie season by going undefeated in dual meets and capturing the Dual County League title. She broke Lincoln-Sudbury’s course record with an 18:34 for 5K. A DCL All-Star, Saunders also competes on the indoor and outdoor track teams. She enjoys following earth science developments.

Fresh off a 33rd-place finish at the AAU Cross Country Nationals in Tallahassee, Simonds was 10th at the Frank Kelley Invitational and seventh at the Frank Mooney meet. She was the 2019 Catholic Memorial champion and was third in the Merrimack Valley Conference meet. Simonds enjoys traveling and going to the beach.

A junior, Theiler was undefeated in the Hockomock League and broke her own home course record. The Hockomock League champion after placing second in 2019, she was MVP of her team and league. An honor roll student, Theiler is an active member of Sharon High’s chapter of the TriM Music Honor Society. She plans to run both indoor and outdoor track.

RUNNER OF THE YEAR: Ava Cote

RUNNER OF THE YEAR: Sarah Harrington

RUNNER OF THE YEAR: Alexandra Saunders 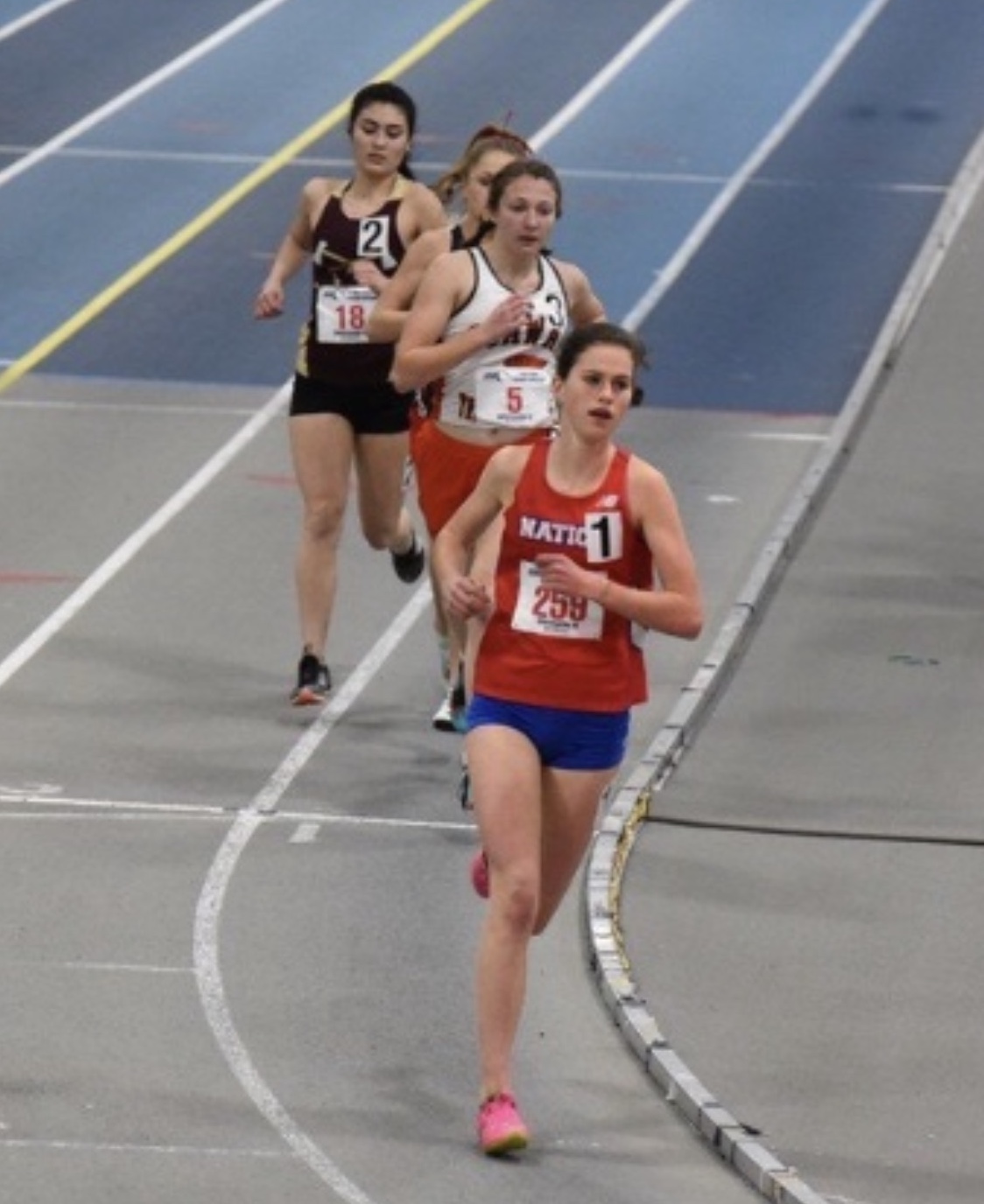