A rare four-sport star for the Red Raiders, this senior center shined brightest on the ice as the two-time Middlesex League Freedom Division MVP. This winter he racked up 13 goals and 16 assists for 29 points in just 10 games, finishing with 164 career points. The honor roll student is headed to Avon Old Farms for a post-graduate year.

The senior center was Keenan MVP, helping the Harbormen to a 14-1 mark and the league tournament title. With eight goals and 13 assists, he shared team MVP honors and wrapped up with 66 career points. A soccer and lacrosse captain as well, he will spend a post-graduate year at Deerfield.

For the second straight year, this sophomore center lit the lamp as often as anyone in the state, scoring 20 goals and adding seven assists for a dominant Cardinals team that won all nine games against MIAA competition. In less than two full seasons, Leonard already has 48 goals. Also a standout golfer, he is receiving interest from Div. 1 hockey programs.

The Hawks caught fire when this senior was installed as the top goalie early in the season and never cooled off as he backstopped them to their first Catholic Conference crown in 52 years while taking league MVP honors. An honor roll student, McGrath posted a 1.16 goals against average and .962 save percentage this winter, and holds a 12-1-3 record for his career.

The Most Valuable Player in the Catholic Central League, this senior defenseman scored seven goals and added 10 assists in leading the Bishops to a 12-1-3 record and the regular season title. For his career, Recupero amassed 14 goals and 30 assists for 44 points. The honors student plans on playing junior hockey before heading to college.

Behind another sensational season for this senior forward, the Tanners grabbed the Middlesex Liberty Division title with a 7-3-1 mark. Surrette was named Liberty MVP with 11 goals and 16 assists, cracking the 100-point mark for his career with 56-48-104 totals. A captain of the golf team, he is off to Phillips Andover for a post-graduate year.

The Clippers haven’t lost a league contest the last three seasons behind this senior defenseman, named South Shore League Player of the Year honors in his final campaign. Berglund registered six goals and 19 assists, giving the three-time SSL All-Star 76 points for his career.

The Warriors grabbed a share of the Hockomock League Kelley-Rex crown this winter as this senior defenseman was MVP of the Kelley-Rex. Bianculli was a two-way threat with six goals and five assists in just nine games, giving the three-time Hockomock All-Star career totals of 20-37-57. He plans to continue playing junior hockey.

In just two varsity seasons the senior right wing went from the team’s Most Improved Player to co-MVP as the Harbormen won the Patriot League regular season and tourney titles. The PL All-Star had 10 goals and 11 assists to share the team lead in points. Corbett was also on the golf team and is planning a post-graduate year.

This senior emerged as one of the state’s top goalies last year during the Rebels’ run to a Div. 1 state co-championship and proved it was no fluke this winter with another Bay State Conference All-Star campaign. Curran had a goals against of 1.11 and a .955 save percentage with four shutouts in nine starts. A varsity lacrosse player, he will do a post-graduate year at Kents Hill.

The reigning Div. 3 state co-champions had another outstanding season and this senior left winger was a huge key with 14 goals and 14 assists en route to Patriot League Fisher MVP. The 28 points gave the two-time PL All-Star exactly 100 for his career at 52 goals and 48 assists. A National Honor Society member, DelPrete was the Patriot League Scholar-Athlete in 2019-20.

The leading scorer in the Cape & Islands League, this senior center was named the Atlantic Division MVP for the Atlantic tourney champion Clippers. Devlin torched opponents for 18 goals and 13 assists on the season, to get him to 100 career points in his final game. A three-time C&I All-Star, honor roll student and lacrosse player, he’s headed to Bridgeton Academy.

A postseason hero last winter when the Marauders grabbed a share of the Div. 1 state championship, this Middlesex League All-Star right wing continued to deliver as a senior with four goals and seven assists on a top line centered by brother Cam, giving him career totals of 44-34-78. An honors student, he plays baseball and will continue his hockey career in juniors.

In his two years with the Redhawks, the junior goalie has garnered Bay State Conference All-Star nods in each season. Gagnon played 29 games for Natick with a goals against average of 1.41, a save percentage of .930, and six shutouts. The honor roll student is transferring to Lawrence Academy.

A four-year player for the Wamps, this senior forward broke through in his final season with his first Bay State Conference All-Star recognition. Leslie had five goals and six assists for a squad that had the league’s top record at 8-1-2. A three-sport athlete as a member of the baseball and golf teams, he has several merit scholarships offers to study engineering.

The senior center was named Offensive Player of the Year for the Knights and struck for five goals and eight assists to help CM advance to the championship game of Catholic Conference Cup. MacNeil, a two-year captain, was named a CC All-Star for the third time this winter. An honor roll student, he also captains the CM lacrosse team.

The Sailors’ leading scorer each of the last three seasons, this senior center had 13 goals and 13 assists this winter en route to the Patriot League Fisher crown. A two-time PL all-star, McBrien wraps up with 79 career points. The multi-sport athlete and honor roll student will take a gap year before pursuing a Mechanical Engineering degree.

There wasn’t a more prolific player in the state this winter than this senior forward, who posted 21 goals and 12 assists in just nine games for the Warriors. Noyes, a key member of the Div. 2 state co-champs a year ago, earned Dual County League co-MVP honors for his exploits, and finished with 94 career points on 49 goals and 45 assists.

The Hawks followed up their first Catholic Conference crown in over five decades with the CC Cup title, and it was this junior left wing who led the way, figuring in all five goals in the two wins with a pair of scores and three helpers. For the season, O’Hara had five goals and seven assists, earning the honor roll student a spot on the CC All-Star squad.

An All-Conference selection for the last three years, the senior forward led the Redmen atop the Merrimack Valley Conference standings this winter and a Div. 2 North crown in 2019. O’Keefe had six goals and six assists in his final season, reaching the 100-pont mark with 48-56-104 totals. He also plays baseball.

The leader of the only unbeaten Div. 1 hockey team in EMass this winter, this senior left wing registered eight goals and 12 assists for the Dual County League champions, earning DCL co-MVP honors. O’Toole, a member of the 2018 state titleists, finished his career with 40 points. He is Vice President of the National Honor Society and a captain of the baseball team.

The senior left wing kept the points coming this winter with 18 goals and 18 assists in just 12 games, leaving the two-time South Shore All-Star third in Abington history with career totals of 56 goals and 68 assists for 124 points. Polito is a three-sport captain, playing golf and baseball as well.

The forward, a three-year captain, collected three Northeastern Conference All-Star selections. The senior had 15 goals and 15 assists this year, eclipsing the 100-point mark at 63-44-107 for his career. The three-time Marblehead Male Athlete of the Year is an honor roll student and will play lacrosse at Wesleyan.

A rock on the blue line for a Clippers squad that won the Cape Ann League regular season and tourney titles, this senior defenseman put up over a point a game with seven goals and seven assists and was named CAL co-MVP. Spence, a three-time CAL All-Star, finished with 46 career points. An honor roll student, he was Offensive MVP for the soccer team in the fall.

The Vikings senior winger had 14 goals and 11 assists, earning Cape Ann League co-MVP honors. Tatro wraps up his ice hockey career with 90 points, but will continue to add to his gaudy numbers with 119 points in just two lacrosse seasons, the sport the honor roll student will play at St. Michael’s.

A four-year player and two-year captain for the Cougars, the senior center carved out a key role on a Super 8 team as a sophomore and has earned Catholic Central League All-Star selections the last two seasons. Thibodeau had four goals and four assists this winter, giving him 40 for his career. An honor roll student, he also plays golf.

After being in net for the Cardinals for three consecutive runs to the Super 8 final, this senior goalie was nearly perfect in his final season, going 9-0 against MIAA opponents with a goals against average of 0.75. A Dream Teamer as a junior, he leaves with a career 1.73 GAA and a save percentage of 1.73. Zaranek is also an All-WMass golfer. 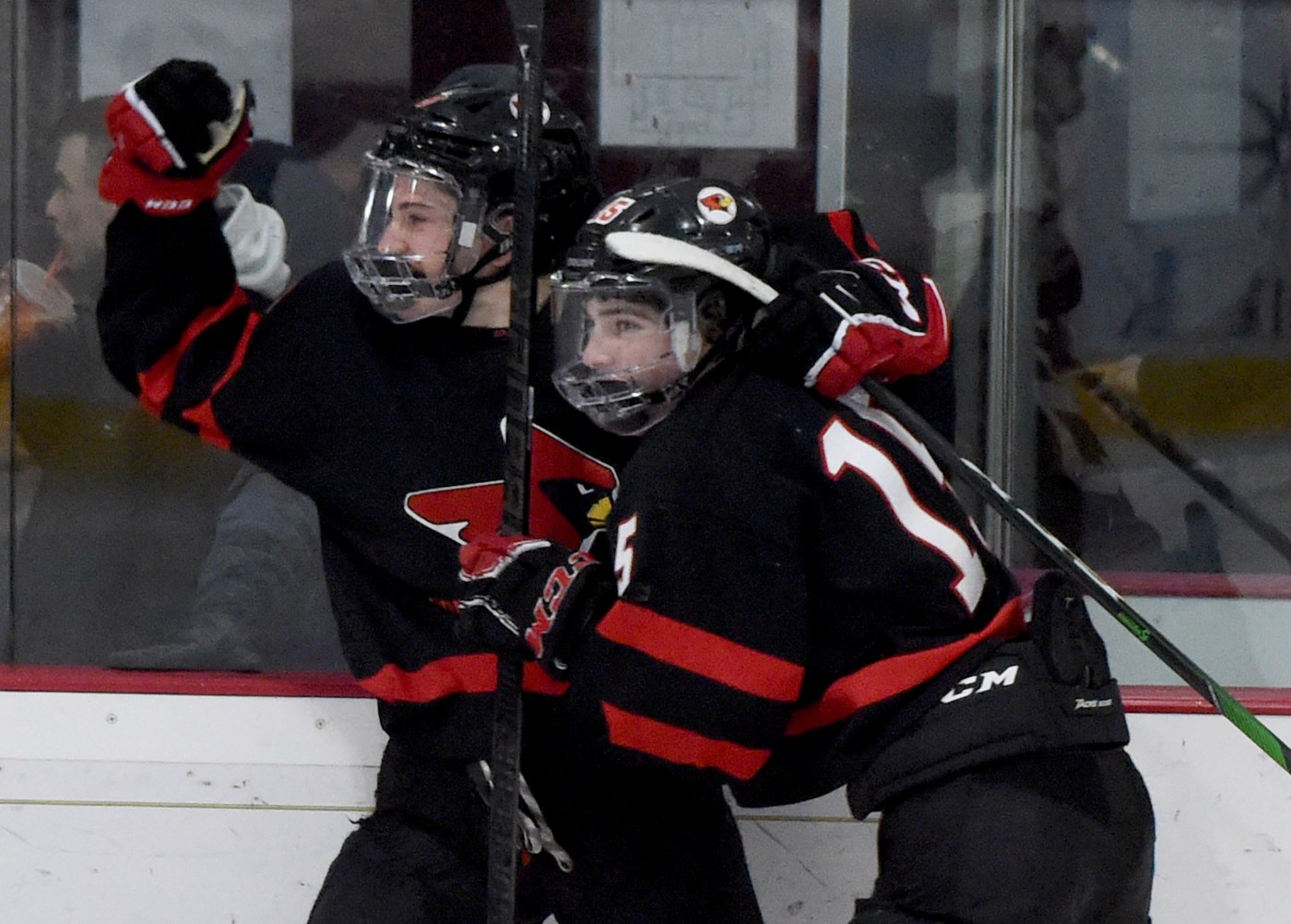