With one mighty rep, a 9-year-old Hanover boy made history.

Marc Nantel benched 100 pounds and broke the presumptive world record for a person his age.

“That was a pretty hard rep. I mean, I was maxed out, so it was the best I could do,” he said. “It was really cool because there were so many people there watching me.”

Marc said he started lifting while wrestling in his hometown and has enjoyed the challenge ever since.

“You can get stronger every day, but not a lot of people put in the work,” he said.

“Every day he gets up, wants to work out,” Marc’s father, Mike Nantal said. “We had a day where it was raining a couple weeks back. I was going out to cut the grass and he said, ‘Well you can’t cut the grass. Let’s go out and flip tires.”

Marc’s trainers said they are amazed by the young boy’s work ethic and that he was already benching within a couple of pounds of the world record when they decided to go for gold.

“It’s just beyond the realm of what I even thought was possible,” trainer Joe Coyne said. “And we’ve actually limited him because we want to keep him safe! That’s our first goal obviously, to keep him safe.”

A video of Marc’s accomplishment has been sent to the folks at Guinness as proof though it will take a few weeks to verify.

In the meantime, Marc said he is training for his birthday in October so that he can break yet another barrier.

“It gives him an opportunity to have a goal, try to achieve that goal, whether it’s school or sports or whatever,” his proud dad said. “That’s really all it does, just adds to life lessons for him.” 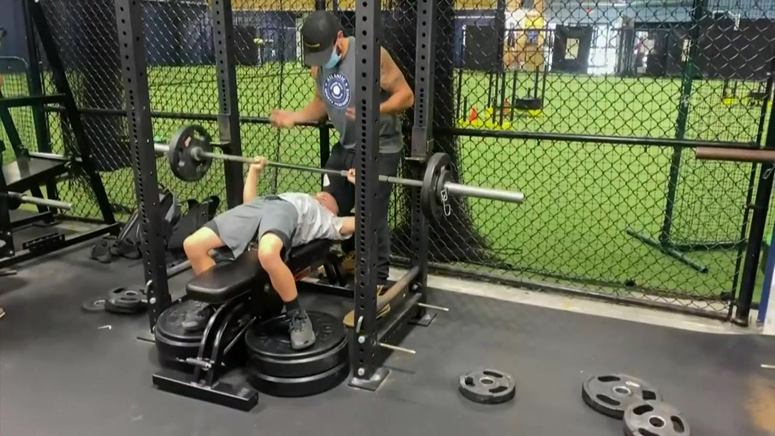